You are here: Home / Relaxation Tips / 5 Toxins to Avoid for a Healthy and Relaxing Life 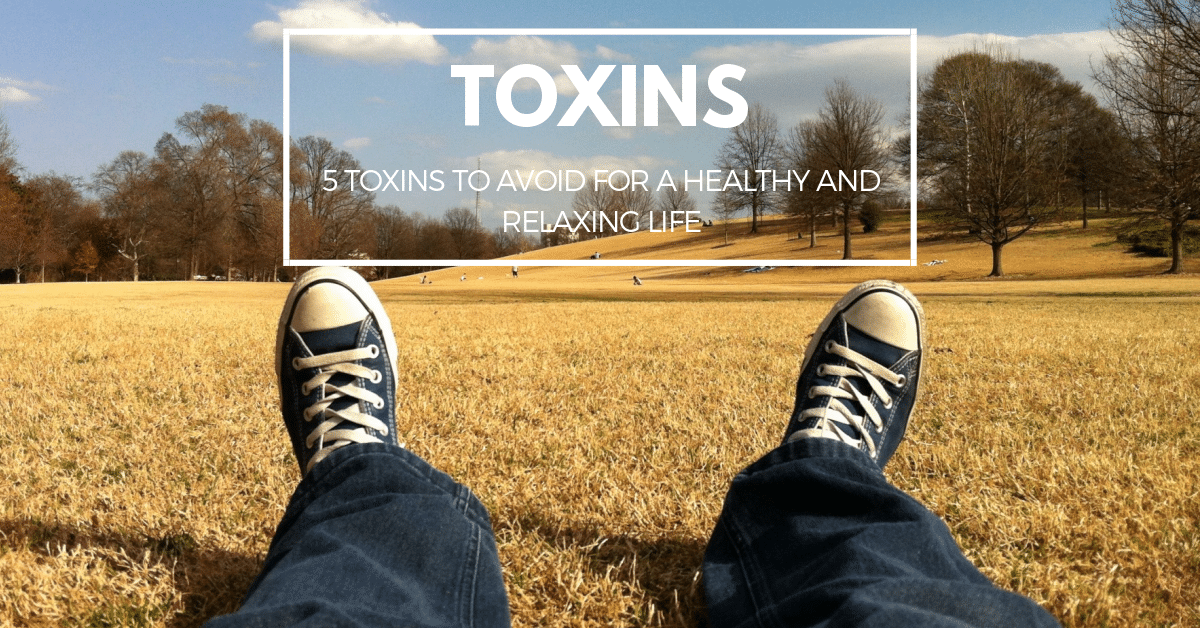 What Will I Learn?

In the modern era, people are becoming more aware of mindfulness practices, and the importance of rest and relaxation. But as useful as this is, it can be equally helpful to become aware of what is draining our energy in the form of toxins that are increasingly prevalent. These unseen toxins can upset out natural balance and have been linked to depression, endocrine disruption, cancer, infertility, autism, and many more serious disorders. While few definitive links have been established, it is certainly a good idea to become conscious of these stressors and to minimize exposure where possible.

Persistent Organic Pollutants (POPs) are organic compounds that accumulate in the body and the environment. There are 12 POPs in total. Two of the more well-known POPs include dioxins and polychlorinated biphenyls (PCBs). Dioxins are highly toxin and can cause cancer, immune disorders, infertility, and endocrine disruption. Dioxins have a half-life of 7-11 years when they enter the human body, so think twice before ingesting any. Dioxins are found mainly in the fatty tissues of meat as well as fish, dairy, and shellfish.  Dioxins are mainly caused by impure manufacturing processes. Everybody has some exposure to dioxins, but as a general recommendation, it is best to cut back on meat and dairy. Ireland, Italy, and Belgium have had severe incidents with Dioxin contaminated in certain foods.

Like Dioxins, PCBs are also found worldwide, and everybody has some level of exposure. Studies have shown PCBs to cause cancer in animals and to adversely affect the reproductive, immune, and nervous system. PCBs are mainly found in buildings constructed before 1979. However, certain species of fish contain high levels, and they can also be found in meat and dairy. In Japan and Taiwan, rice oil has been found to be contaminated with PCBs. PCBs are not excreted by the body, and they remain in the fat tissues where they can be passed to infants through breast milk. The biggest manufacturer of PCBs is Monsanto, and they have been used in lubricants, pesticides, paper, adhesives, plastics, paint and flame retardants.

Phthalates are hard to avoid, as they are used everywhere. However, some sources are more potent than others. Additionally, recent research has indicated a wide variety of negative health consequences associated with phthalates. They are found primarily in cosmetics and air freshening products. In the USA, the use of Phthalates has been banned for children’s products as per the Consumer Product Safety Bill passed in 2008. Phthalates have been linked to breast cancer, ADHD, obesity, low IQ, diabetes, autism, and male fertility issues. Phthalates include a large class of chemicals, none of which has been isolated and studied in depth for its implications on human health.

The bad news is that there is virtually no escape from Phthalates. They are found in household items, personal care products, deodorants, household cleaners, and food. Manufacturers are not required to list them on the labels, which compounds the problem. However, dairy is a very high source of Phthalates, as it is often processed through plastic tubing and pulls them right out. Air fresheners and fragrances are also very high in Phthalates and are best avoided. According to the American Journal of Respiratory and Critical Care Medicine, regular use of sprays can increase the risk of asthma by 30-50%.

Parabens are made of a number of different toxins. The most common are ethylparaben, butylparaben, methylparaben, and propylparaben, and they are frequently found in cosmetics. They are found in shampoos, conditioners,  facial creams, and shower gels. Paraben mimics estrogen and disrupts the endocrine system. They have also been linked to breast cancer.  To avoid parabens, you can make your own organic shampoos and gels, or purchase Ayurvedic or organic shower amenities. You can also shop for products listed as ‘paraben free’.  Parabens are added to bathing products to extend their shelf life drastically, though other companies have found more natural alternatives to preserve the products.

There are over 35 heavy metals, the most problematic being lead, mercury, arsenic, and cadmium. Heavy metals mainly accumulate in the food supply which is then absorbed by humans. However, they can also frequently accumulate in the water supply. Many species of fish can have high amounts of mercury, and lead can be found in lipstick, drinking water, and ceramic bowls and vases. You can get a heavy metals blood test online or with a doctor to test levels, as this can be the quickest way to test your levels. There are also a number of ways to detox naturally from heavy metals. Powerful natural detox foods include green leafy vegetables, chlorella, spirulina, and certain fruits such as grapefruit. Zeolites, activated charcoal, and Epsom salt baths can also help to detoxify. Consider a juice fast to detox from heavy metals.

While there is no official way to quantify, some sources indicate that 99% of all illnesses are linked to stress in some fashion. A poor relationship at work, a divorce, too many tasks to complete or a bereavement in the family is worse than any toxin. There are many different kinds of stress and it affects everyone differently. There is the minor stress of having to get up every day at the same time with an hour-long commute to an unfilling job. Then there is the sorrowful stress of the loss of a loved one. Being angry or jealous are also sources of stress and damages the body in various ways. Constantly seek to destress and relax using holistic techniques.

It may seem that toxins are impossible to avoid, but there is a general trend. Most occur as a result of synthetic or artificial products, primarily cosmetics or overly processed foods. Eliminating meat, dairy, synthetic cleaners, and cosmetics can actually cut down on a wide variety of toxins. You can also consider a foot spa, yoga, juice fasting, or an Epsom salt bath for a gradual detox over time. These holistic methods do take some time to kick in,  but they work and can help anyone to relax and destress.

Hi there, this is Karen. From early childhood, I wanted to help people in pain. No wonder I've become a doctor. My ultimate goal is to give people a comfortable life. This is why I've created my blog. I'm sharing with you how to get rid of pain and live a fulfilled life. With my medical background, I can spot useless stuff. I'm only talking about devices that help. Enjoy my posts and put them to good use.